You are now visiting Danish Cultural Institute in Turkey.  See where else we work
TR/EN

Danish Cultural Institute Turkey attaches importance to the education of children. Therefore, DCI Turkey develops projects that teach children about the intercultural dialogue between Denmark and Turkey while creating an environment for children to express their creativity. In this regard, DCI Turkey has contributed to the ATTA Festival, Turkey’s only international art and culture festival for children, with workshops on LEGENDS WORKSHOP: Nordic and Turkish mythology illustrated by children in collaboration with the Ministry of Foreign Affairs of Denmark, Ministry of Culture Denmark, Virtual Museum of Children’s Art, The International Culture Panel of Denmark, Danish Cultural Institute, Gazhane Museum, ATTA Festival, Atta Hygge, and Billedskolen I Tvillingehallen.

Danish artists Patricia Boberg, and Katrine Marie Nielsen, have traveled from Copenhagen to Istanbul to run the three workshops between 25-27th November. The workshops have taken place at local schools and the Gazhane Museum – a historical and artistic melting point in the heart of Istanbul. The legends chosen for the workshops were the Nordic legend Thor and the Midgaard Serpent and Turkish legend Shahmaran Queen of Snakes with the focus on the cultural similarities between the two myths. 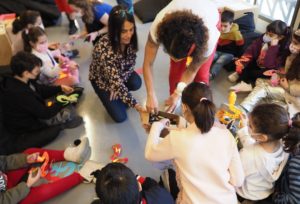 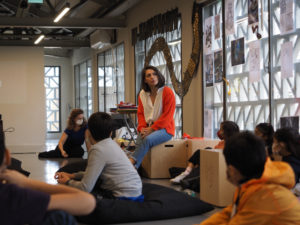 The two Danish Artists Patricia Boberg & Katrine Marie Nielsen taught Turkish children to make their own Midgaard Serpent and Shahmaran Snake together in a team spirit, where the children’s artwork was exhibited at Gazhane Museum. Further, an actor performed the myths for the children to introduce the culturally rich legends.

The purpose of the project was to enrich children’s education in Turkey via Danish Arts and Culture, as the Danish Culture Institute and DKI Turkey believe that it contributes to reflection, education, and experiences. Furthermore, the intention was to strengthen a cultural understanding of Danish and Turkish culture, as well as create an open and curious dialogue between Denmark and Turkey at the child level.

If you have any questions, you are welcome to contact us.